skip to main | skip to sidebar

Friday night, will I watch The Late Late and that Skinny gombeen or will I plan the class for tomorrow!! I was delighted with the turn out from last Saturdays class, Feb the 11th, 9  students turned up and the time seemed to disappear, it was 1pm before I checked the time and it seemed like we had just started, not sure the students felt the same however!! So, I have a few ideas for tomorrow, thanks to students suggestions, it's nice to have a few prompts to perhaps work on Asanas that may interest those who come that I may not think of otherwise doing.

I had another 'interesting' article sent to me from the Sunday Telegraph, 12 February, 2012, in relation to the negative side of yoga, believe it or not there are some, and rather than rejecting it outright and feeling wounded at something I love doing it is a well written article and well worth a read if anyone out there interested. In a nut shell, it discusses how yoga when not practiced, carefully and with good teachers one can sustain a  number of injuries, of which I would wholeheartedly agree. However, when we do any activity, one can sustain injuries, I think that's part of getting up in the morning. Some weakness can already exist in people and when we come to yoga, these can certainly be exacerbated, as they could be no matter what physical activity was undertaken.

Nonetheless, yoga, and the nature of certain asanas, can involve putting your body into many unnatural shapes, which many people find extremely challenging, especially if you spend the majority of your waking day sitting down, or even standing as many jobs require. Our Western hips become very tight, our Hamstrings and lower back, which make many Asanas, even basic ones difficult, painful and if not done with careful attention likely to injure us. As I frequently say, we should be careful not to let our 'ego' rule when we go on the mat. The real thing for me anyway is, not whether you can put your leg behind your ear, but whats really going on in the whole body, both  physically and mentally, and why push yourself if it's unpleasant. 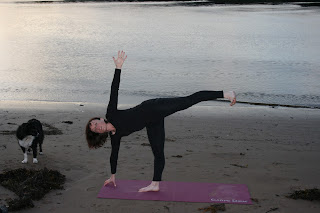 Yoga is a huge lifetime of learning...only one part in the huge cog of life, it's up to each individual to take what they can from it's many benefits. Negativity exists in everything, when it raises it's head and how you deal with it is one of the cogs in life that needs constant oiling. When I practice I take a few risks every now and than, I don't always play it safe, I don't always listen to my common sence, I do ocassionally regret it the next day, and I say to myself, there you go, the 'ego' wins again..but I keep going back to the mat, and hopefully learning and changing as I do. Philosophy of Bridget!
Posted by Yoga Kerry